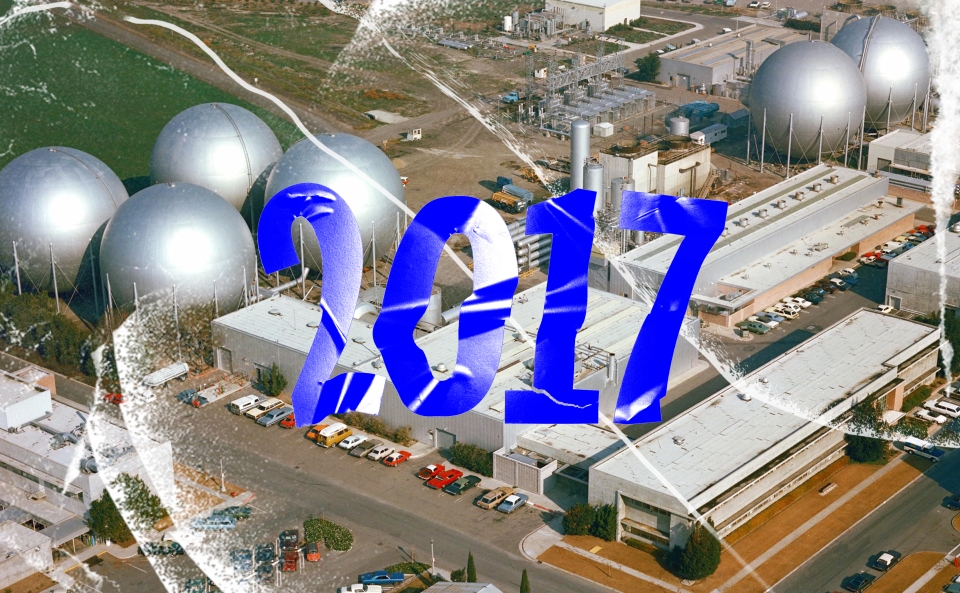 After a long standing fall to mental health rock bottom last January, 2017 became the year I finally decided to work on taking my life back. It’s been a long journey that I’m still working on but I can say that I am in a much better place than I was. This change I feel can be examined closely in my work as 2017 became a year of major milestones in my career as a Freelancer and Artist. Which is why I decided to make this blog post reflecting on my year through the work I got to make. (Also because I’m still working on a new portfolio site… oops.)

Give Me Shelter (Illustration Zine)

Starting off the year I challenged myself to make headway towards confidence in calling myself an Illustrator through my first purely Illustration focused zine. Give Me Shelter is a xerox zine inspired by the ideas of childhood secret forts, imaginary hideouts and Honey I Shrunk the Kids-esque dreams of building mini houses in the family garden. Through this project I came to understand a lot about how I present narratives and images on a page. Copies are currently sold out but I’m pondering a second edition. 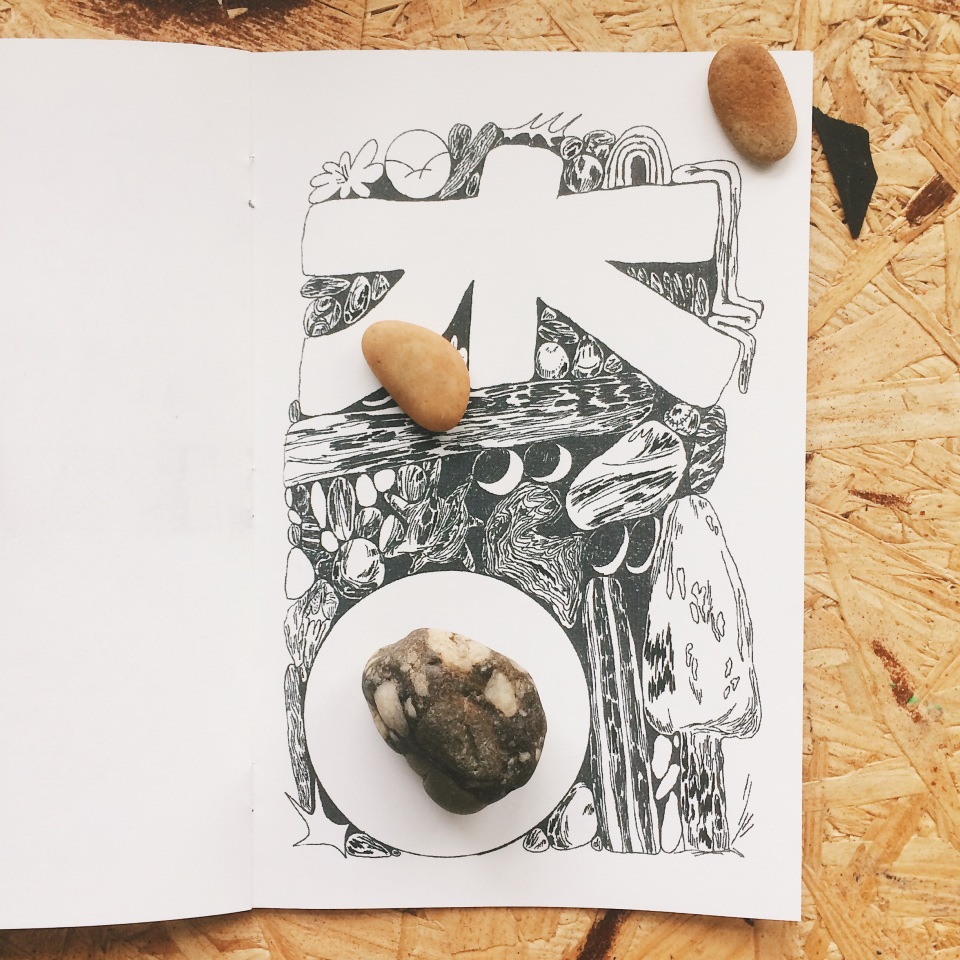 One of my bigger projects of the year Weekly Still Life was started as just a weekly exercise to help me build my schedule as I started to work as a freelancer from home. But as the series went on it started building meaning with each passing week as more people engaged with it. Through this project I witnessed an artistic community start to build around me and support me through all the projects ups and downs. This project I feel came to reflect my progress with my mental health over the year. Even so much as coming the point of need to teaching me to let go as I put the project to rest upon reaching 100 Illustrations. I talked about it in a previous post but to celebrate this completion I had various join me in one final piece. The culmination of this project is currently in the process of becoming a publication with Platform Editions and I’m mulling over the thought of an extended sequel to the series. 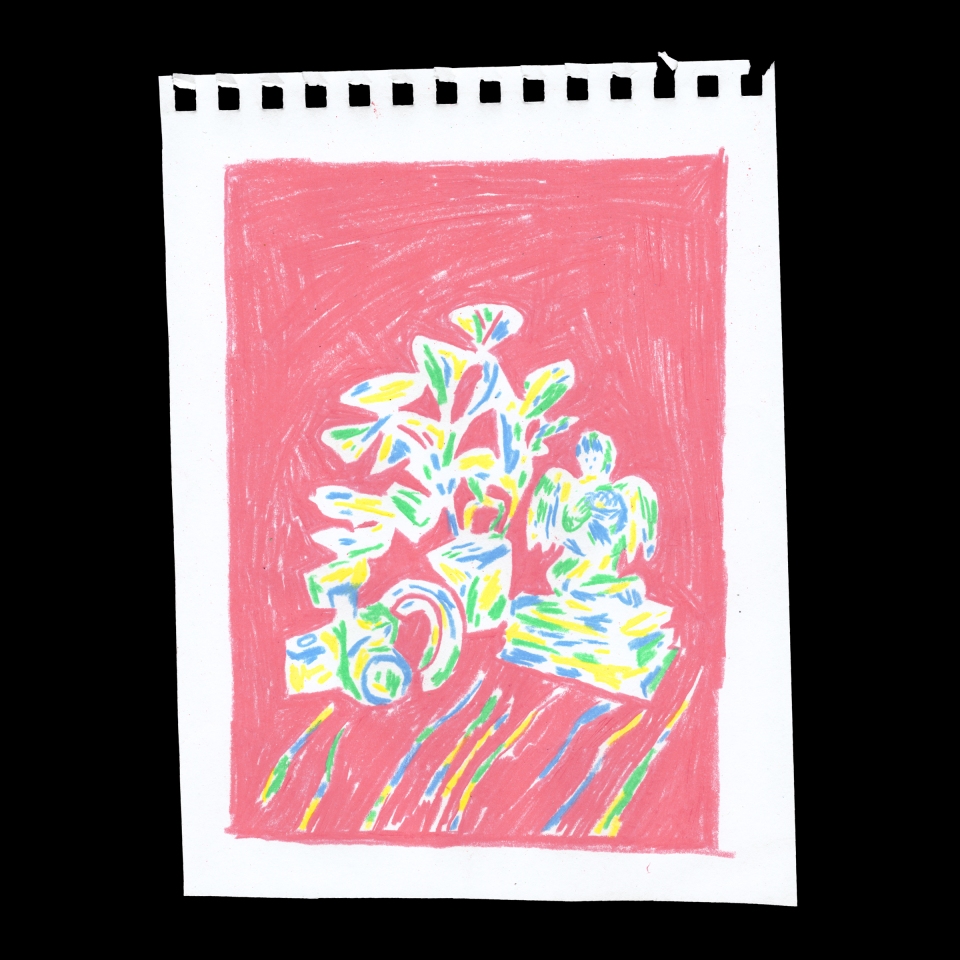 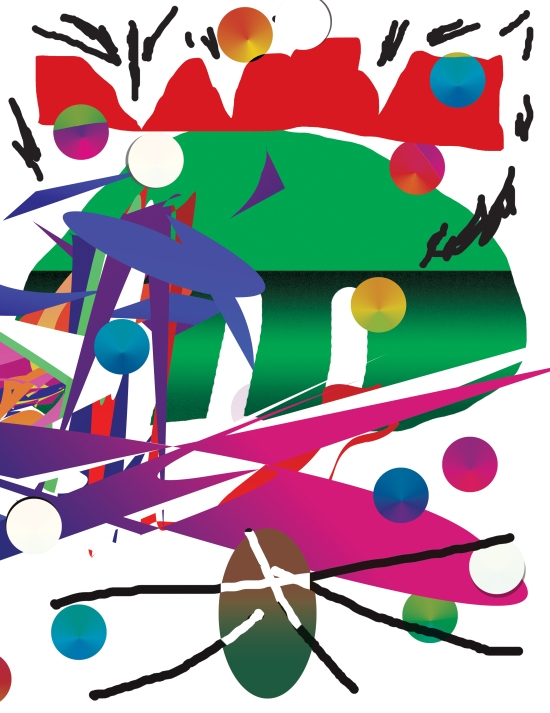 I met Rei back in the fall of 2015 at JACK NYC. When I first talked to him I was a nervous wreck because I had been a fan of his work for quite some time, but now two years later me and Rei are working together on a collaborative zine and will be launching our work in an exhibition in Japan. Crazy how life works sometimes. During our time in each other’s countries we came to understand a melancholy feeling of gratitude for our time there and everything we did because we knew we were temporary residents. This feeling can be aligned to the Japanese proverb 一期一会 (Ichi-go Ichi-e), this phrase which was born out of Japanese tea ceremonies can be translated to “one time, one moment”. We streamlined this feeling into our project together not only in the concept but also our process for producing the work. We each start a piece and then hand it off to each other, we add to the piece in small ways each time passing it back and forth until we feel it is completed. Each time the piece is changed the receiving participant gets to experience the others world within the piece and appreciate their time there as they add to it and pass it on. Once completed this project will be published by TXTbooks.

Created alongside Shannon McLean as apart of our Research Studio Other People Places Things, 1-2-Punch is an exploration of the time and space taken up by commuting and how it can be treated as a creative ecosystem for graphic observation/collecting. The publication houses a proposal for exploring this topic as well as, examples, including documentation of the different ticket punch shapes (Chads) used by conductors, which were converted into stencils. Printed as a tabloid the publication has the flexibility to be deconstructed in 3 double sided posters. Within is also contained a notepad sized zine containing the current collection of chads. We launched the publication on April 8th at Gallery XXI, the event panned out to be a momentous reunion for me and Shannon as most of people who came were fellow alumni and old friends who we hadn’t seen in over a year. Coming into 2018 the first edition is almost sold out and Shannon and I are already planning out the second edition. 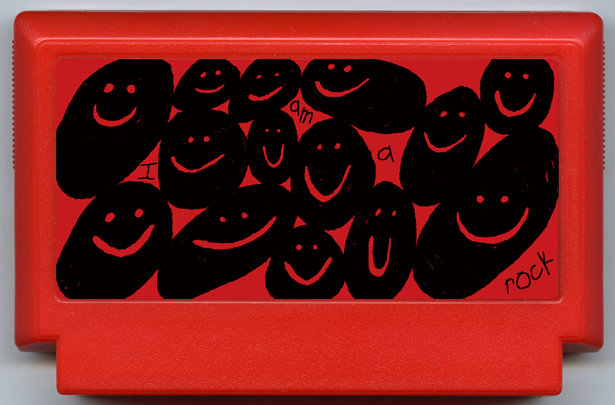 I am a Rock (Famicase Exhibition 2017 Entry)

One of the first Graphic Designers I grew to idolize in college was Cory Schmitz. Cory was doing all the things I wanted to do for all the people I wanted to do them for. Through Cory I discovered the Famicase Exhibition. An annual show where artists submit fictional concepts for games on the Nintendo Famicom. After fantasizing about this competition for years I finally summed the courage up to submit. My game was called I am a Rock, inspired by the Dad’s love for Simon and Garfunkel, a puzzle game about gaining some perspective. To my surprise I got in and got to celebrate my work being shown in Japan. I’m eager to submit again, or even better maybe start developing my own game!

In 2017, my friend Peter Steineck started Hellavision Television, a new open submission animation series. He’s hosted it two times now and going into 2018 he was awarded a grant to continue the series and I’m so proud of him. I was lucky to be apart of the series with my first two forays into animation. For the first edition I created Objectified a playful exploration of what if the things around you could tell you how attracted they are to you. Then Kasa-Obake-San find his Inspiration is a short story about the famous Japanese Yokai hunting for his purpose and finding it in shielding a young girl from the rain. I’m excited to keep experimenting with animation through Hellavision. You can watch the two previous iterations for free on Youtube.

Over the summer I was given the chance to participate in Boring Boys Club’s first exhibition. I was really excited because I’ve been looking for an excuse to get back into more large scale work. For this show I produced Wordsworth’s Daffodils a painted Daffodil on a wood board with a hole cut through for someone to fit their head. The piece played with phenomenology and the recognizable act of costume play of ‘Head in a hole’ attractions. As viewers used the piece naturally to take funny pictures they also were engaging with placing themselves in the perspective of being the famed Daffodils that Wordsworth marveled over in his poem I Wander Lonely. 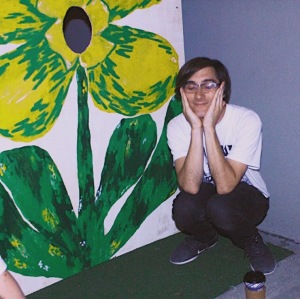 Over the summer I was given the chance to cross off something high on my Graphic Design bucket list by designing the first issue of the Architecture magazine Take Shape. Take Shape is a new publication charting the waters of architectural, legal, and political thinking. Following the success of the first issue I now go into 2018 the Art Director for the future issues of the publication. 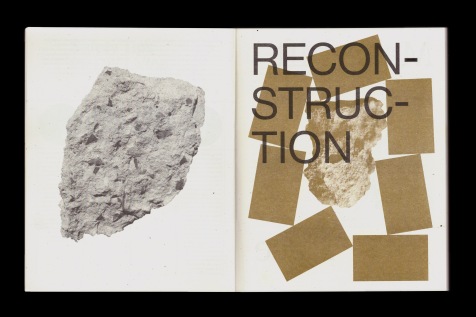 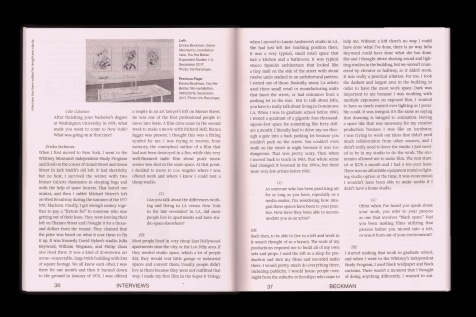 Group Effort is an experimental publication published as a spiral bound, 5-Color RISOgraph book by Brooklyn based publisher TXTbooks. Rebounding off of Gaston Bachelard’s The Poetics of Space, Group Effort seeks to explore the phenomenology of books, their architecture, and our relationships to them through the words of Artists and Writers throughout history. Corresponding illustrations establish a conversation between text and image on the page wherein the reader is invited to be the third voice in the group discussion. We live in books, their covers are the walls that keep us safe, the words are furniture that shapes the space, the bibliography and footnotes are the exposed foundation in the basement, and images are the corners we daydream into. 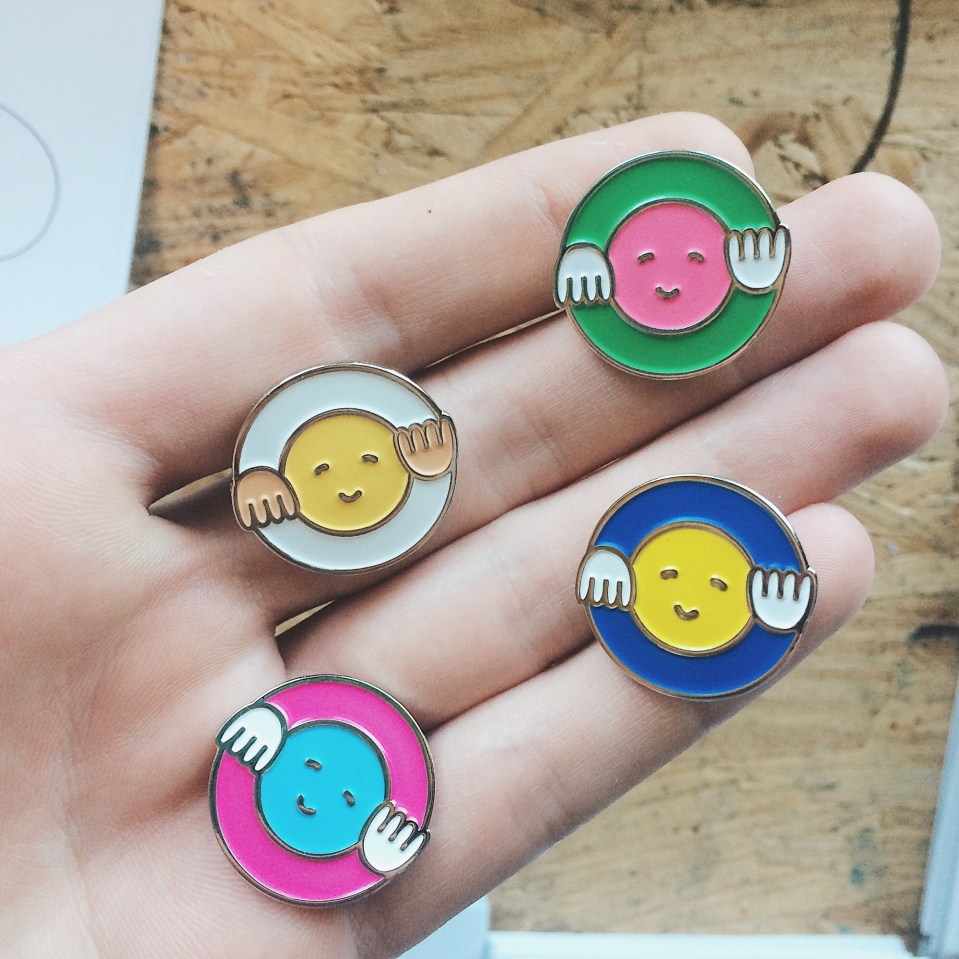 Hug Yourself from Time to Time (2nd Edition)

Back by popular demand I made a 2nd edition of my self-love pins. This time with two new additional colors. I’m really happy with how people responded to these pins and they are almost sold out for a second time which makes me really grateful.

Early in the summer I received a pleasant surprise when Chicago based RISO publisher Platform Editions reached out to me to work on some projects. They wanted at the time to work on 3 books with me for varying projects I had in the works. One of those projects was producing a publication out of my collage work that was scattered online. A lot of this work was produced in an exercise to push myself to collage daily and generally had been done in a care-free stream of consciousness method so I never saw it as much more than sketches. Platform worked with me to give the pieces new life in the form of a 4-color RISO publication which so far has been extremely well received. 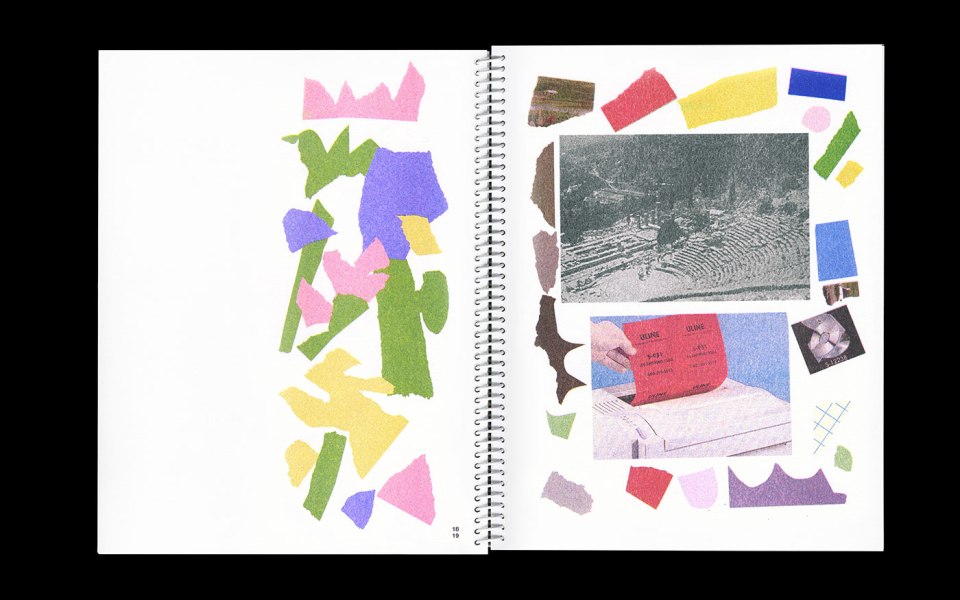 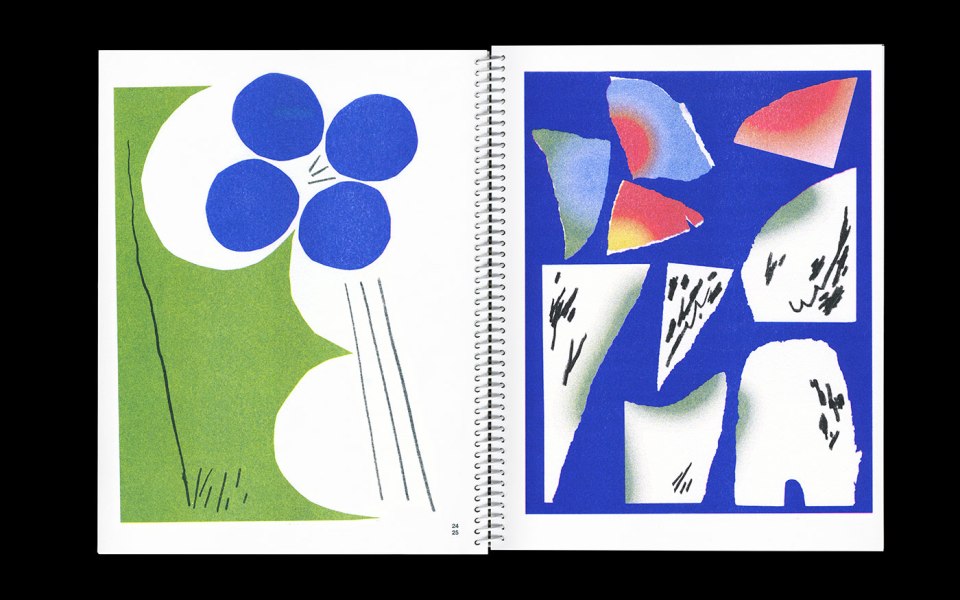 I don’t really know a good way to wrap up this post other than to say thank you to everyone who was supportive of me in any shape or form this year as I got back on my feet. To new and old friends, thank you, I hope to see and hear more from you in the coming year.